Skip to content
Home/Content Marketing, Social Media/Instagram Action Blocked – What is it and how to fix it?

Instagram Action Blocked – What is it and how to fix it?

If you’re trying to market on Instagram, you may have been hit with an action block at some point. An action block is Instagram’s latest way of telling you that you’re doing something that they don’t want you to be doing.

2021 update – I recently uploaded a video talking about my experience with action blocks. If you prefer viewing over reading, feel free to watch the video below! 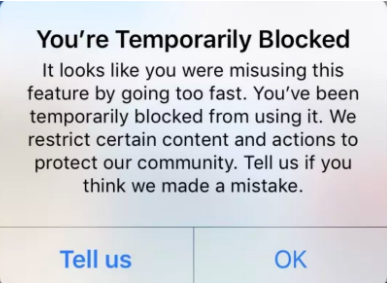 “You’re Temporarily Blocked. It looks like you were misusing this feature by going too fast. You’ve been temporarily blocked from using it. We restrict certain content and actions to protect our community. Tell us if you think we made a mistake.”

What are the different types of action blocks?

There’s the temporary action block, which cam usually lasts between 12 and 24 hours.

There’s also action blocks that give you an expiration date. These can last between a day to a month depending on the severity of your situation.

A permanent action block occurs when they don’t give you an expiration date. This means that you or your IP address have been frequently blocked, and the block won’t be lifted unless you try reporting it to Instagram.

If you find yourself getting action blocked frequently, you may be working yourself towards a ban on Instagram, which you want to avoid at all costs.

A common growth tactic that Instagram users partake in is “follow for follow”, which is exactly what it sounds like. Users follow similar accounts hoping that they receive a follow back, snowballing their audience and engagement. They’ll also unfollow the accounts that decide not to follow back. Each time you follow or unfollow someone, Instagram counts this as an action. When you start following north of 20 accounts in one sitting, this starts to raise a flag and can lead you to get blocked.

Liking too many posts at once

Similar to the follow for follow method, Instagram users will also partake in “Like for Like”, which involves liking numerous photos in an account feed or hashtag feed. If you’re going to start liking and commenting on a bunch of posts, be sure to do it in a way that Instagram wouldn’t consider spammy. If you leave insightful comments (more than just an emoji), and like a few pictures within a few hours, you should be able to keep your chances of getting action blocked to a minimum.

Leaving too many comments and sending out unsolicited direct messages will get you slapped with an action block quickly. Especially if you’re using automation to do it for you.

Instagram tends to be stricter with accounts that are newer. This is because they don’t want spammers creating new accounts to harass people with their spammy marketing tactics. Someone who is completely new to the Instagram platform won’t be following and commenting on several accounts immediately after they join the platform, so why would you even think about it? If your account is under one month old, make sure you keep your actions to a minimum. You don’t want to experience an action block early on and hinder your growth. As your account ages a few months, you should be able to perform more actions without having to worry as much.

Instagram removes hashtags that have been abused to death for platform manipulation. If you accidentally include one of these hashtags in your set of tags, you’ll ruin the visibility of your post. If you continually use those banned hashtags, you’ll likely receive an action block for attempting to engage in spammy behavior.

To check if a hashtag has been banned, try searching for it on the explore tab. If everything seems normal, then the hashtag is safe to use! If you see a message saying that the content has been hidden due to the content not matching the community guidelines, then you’re trying to use a hashtag that has been banned. Remove it from your list and you’re good to go.

You are using third party software to automate

Instagram has a strict policy against automation tactics. Using any automated software for the sake of following, unfollowing, or commenting on other users’ profiles is strictly prohibited. Now, that doesn’t mean that people are still doing it anyway, but it’s a game of cat and mouse. Instagram will continue to crack down on any software that violates their terms of service. If you’re using any botting software, make sure you keep your settings as realistic as possible. Following hundreds of accounts or leaving hundreds of comments is asking for a block.

How to recover from an action block?

When you receive an action block on Instagram, sometimes they’ll give you the option to report it as a mistake. If this is your first action block, reporting it might help get the block lifted faster.

If you’re using automated software, you need to stop doing so immediately. If your account has been flagged for using bots, you’ll continue to receive action blocks until they ultimately decide to remove your account for platform manipulation.

If you’re engaging in spammy behavior such as like for like or follow for follow, you need to consider reducing how many actions you’re taking when you engage with other users. Try taking actions in spurts instead of doing them all in one sitting.

I know how frustrating it can be to receive an action block when you’re focusing on growing your Instagram profile. It truly sucks, and in the moment, it can feel like your Instagram reputation is damaged, but if you continue to follow Instagram’s guidelines and avoid any automation, you’ll keep your chances of getting action blocked to a minimum.

How to Market on Instagram and Build a Loyal Following

If you’re interested in my SEO services or have a question about digital marketing, feel free to reach out here. 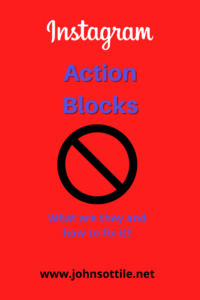